If you’re looking for information on Atacama Desert tours, you’re in the wrong place (and you need to click here instead). This article is dedicated to the joy that is Chilean desserts, not Chilean deserts! With Easter just around the corner, people the world over are preparing for an excuse to enjoy the sweeter things in life. So in celebration of all things indulgent, we’ve decided to dedicate a whole article to some of Chile’s most iconic sweet treats!

This may look like a plain old sponge cake, but tres leches translates as ‘three milks’ in English, and refers to the three different kinds of milk in which the sponge is soaked (whole milk, evaporated milk and condensed milk). After soaking in this mixture, the light and fluffy sponge takes on a melt-in-your-mouth texture, complemented by a light toffee sauce. Warning: This cake is extremely moreish!

The chirimoya, or custard apple, is just one of Chile’s delicious summer fruits. The fruit takes its English name from its creamy texture and sweet flesh, for which it is sometimes also known as the ice cream fruit. Chopped and combined with a splash of freshly squeezed acidic orange juice, this perfectly balanced fruit salad is a light and refreshing summertime dessert.

This traditional dessert is the Chilean cousin of the Swiss roll. The main difference is that the brazo de reina is usually filled with manjar, a kind of caramelized condensed milk that pops up in many of Chile’s desserts. Although manjar is the traditional filling, crème pâtissière, chocolate cream and fruit jam are also used.

Although this is strictly a drink, in our view, any drink that’s so dense it has to be served with a spoon has definitely crossed over into dessert territory. Mote con huesillo is a Chilean institution, with specialised carts found on every street corner. The sugary syrup base is complemented with a hearty helping of cooked husked wheat (mote) and at least one stewed dried peach (huesillo). 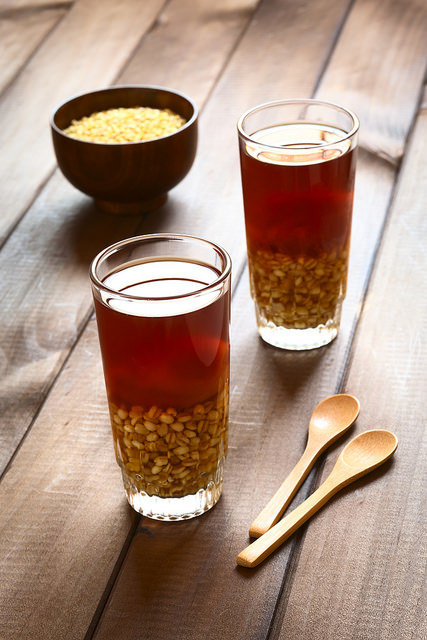 This crème caramel lookalike has a lot in common in taste and texture with flan dishes that you might be familiar with from other parts of the world. Woe betide anyone who calls this a flan however, as there is an important difference: Chilean leche asada is baked directly in the oven rather than cooked in a bain-marie, giving it a firmer texture and a baked top.

Ask a Chilean friend and the chances are they’ll tell you that alfajores are Argentinean, but they’re so ubiquitous in Chile that it’s hard to escape even the shortest of tours in Chile without eating at least one. A filling of gooey manjar caramel is sandwiched between two soft shortcake-like cookies and may then be dusted with icing sugar, dipped in white, milk or dark chocolate, or simply left bare.

This take on the French mille-feuille slice adheres to a tried and tested Chilean dessert philosophy: Step one - take a well-known dessert. Step two - add manjar caramel! Whilst it can be baked as individual slices as is common elsewhere in the world, milhojas cake is also baked as a full-sized cake dusted in icing sugar and cut into substantial wedges.

If the word kuchen doesn’t sound particularly Chilean to you, that’s because it’s not. In fact, Chile is home to many generations of German immigrants, especially in the southern Lake District region, and happily they brought their desserts with them. The word kuchen actually encompasses a whole array of cakes, pastries and tarts.

More of a snack than a full-blown dessert, the humble cuchufli nevertheless wins the award for the Chilean dessert with the name that’s the most fun to pronounce (koo-choo-flee). The cuchufli is a simple sweet, made from a hollow roll of airy wafer filled with smooth, sweet manjar and sometimes dunked in chocolate for good measure.

If you’re visiting Chile around Christmas time, treat yourself to a slice of pan de pascua, a dense fruit cake thought to have evolved from Germany’s stollen and Italy’s panettone. The cake usually contains candied fruits, raisins, walnuts and almonds as well as spices and a generous dash of rum or other spirits.

If this short introduction to Chile’s desserts and sweets has your mouth watering for more, why not take a look at some of the country’s irresistible savoury dishes, or book your own tour to Chile to try them for yourself!

Odds are, if you’ve traveled down to Chile then you’ve surely sipped on a famous pisco sour cocktail. It’s a tangy treat made straight from grape...
END_OF_DOCUMENT_TOKEN_TO_BE_REPLACED

Daydreaming about your trip to Chile? Recreate the cultural magic by cooking traditional Chilean food right from your own kitchen. The cuisine is...
END_OF_DOCUMENT_TOKEN_TO_BE_REPLACED

Have you heard the legend of Casillero del Diablo? It’s a story that takes place in a dark wine cellar in the Chilean countryside. A story that...
END_OF_DOCUMENT_TOKEN_TO_BE_REPLACED