Hiking Torres del Paine: The Best Views in the Park

Torres del Paine National Park in the remote wilds of Chilean Patagonia is frequently cited as home to some of the best views in South America. Its scenic credentials have earned it a spot at the top of many a “must-see” list. It’s not just the unmatched combination of snarling mountain peaks and fractured blue glaciers that make the landscape so striking. Even the brooding weather conspires to cast an ever-changing light over the picturesque scenery and the racing clouds can be as dramatic as the mountains themselves.

Here we take a look at where to enjoy the very best views on your Torres del Paine hike. 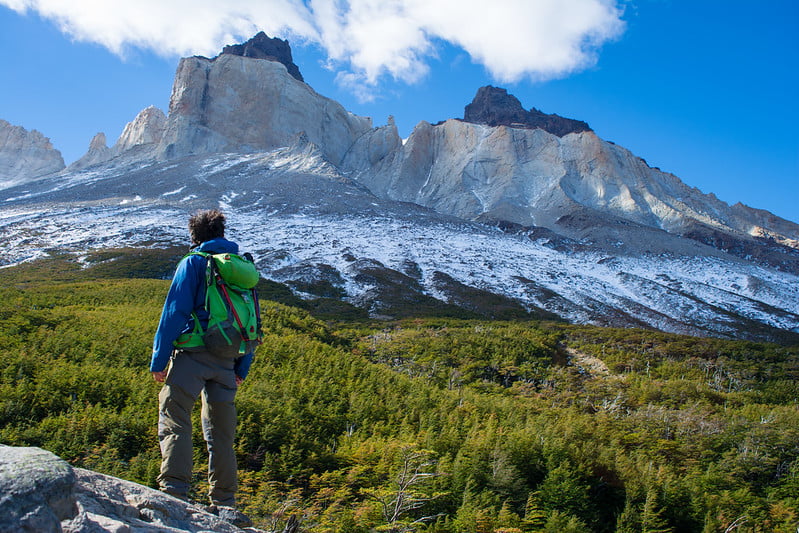 The Towers from the Towers Base

Let’s start with the obvious choice. The three granite Towers that give Torres del Paine National Park its name are the dominant feature of the landscape and can be appreciated from many different angles and many different viewpoints around the park. Every visitor who comes to hike in Torres del Paine National Park dreams of making the full-day trek up to the milky glacial pool at the very foot at the Towers themselves.

This view is a notoriously fickle one to catch since Patagonia’s changeable weather can leave hikers struggling to see their hand in front of their face never mind the stone giants just beyond the lake. But the payoff when the skies are clear is spectacular enough to ensure that hikers will keep pounding this trail (sometimes before sunrise!) just to be in with a chance of getting lucky. 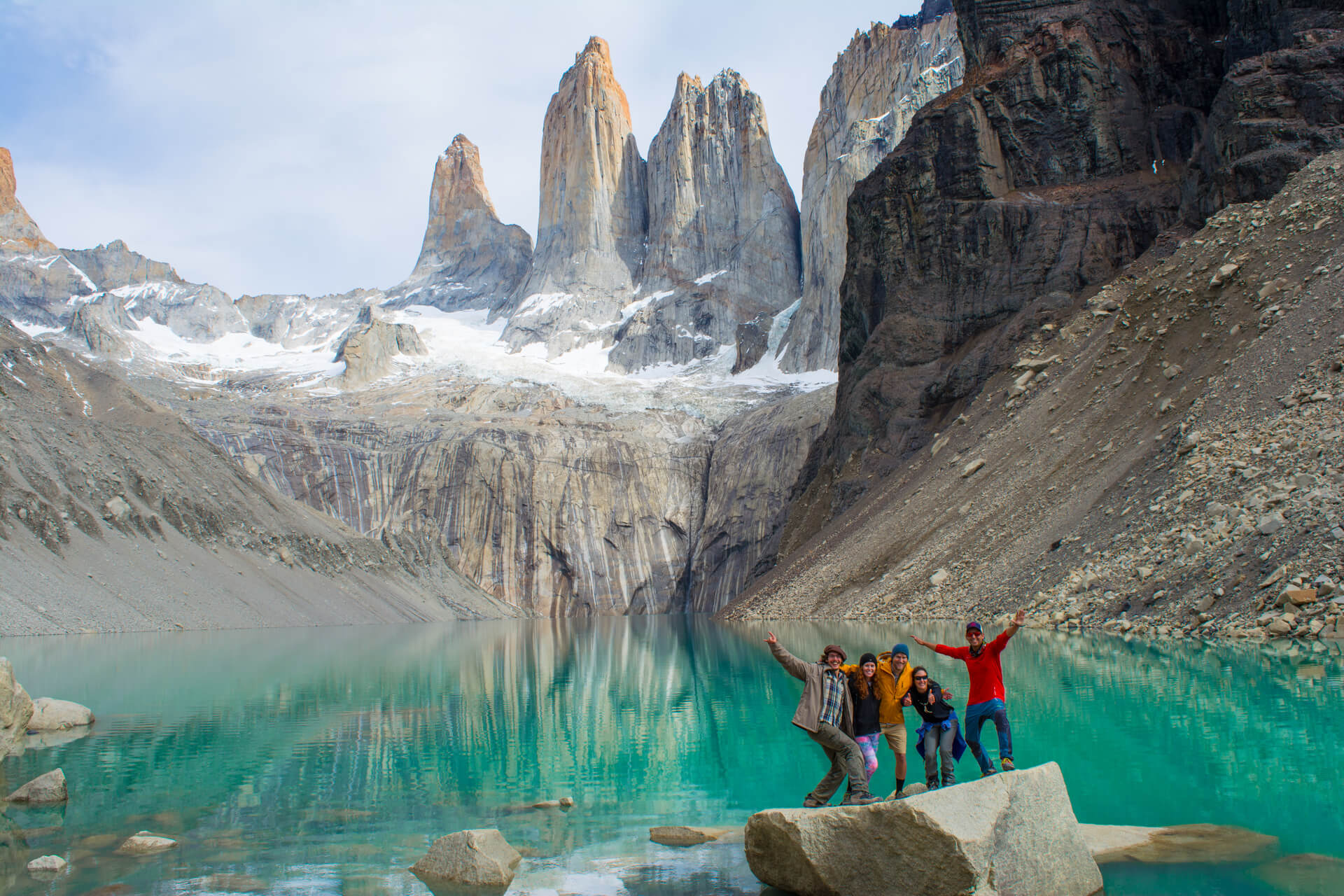 Only the mighty trekkers aiming to complete the full Torres del Paine Circuit Trek have the opportunity to enjoy this breathtaking vista across the vast expanse of the Southern Patagonian Ice Field. The hike across the top of the John Gardner Pass is notorious for being one of the most challenging sections of the entire trail but it also holds one of the greatest rewards. The Southern Patagonian Ice Field actually occupies the entire western side of the park but this is the best viewpoint from which to appreciate it in all of its immense majesty. The white, blue and grey tract of unending ice is riven with a crazy maze of deep fissures that fascinate the eye long after the initial wow-factor has ebbed away. 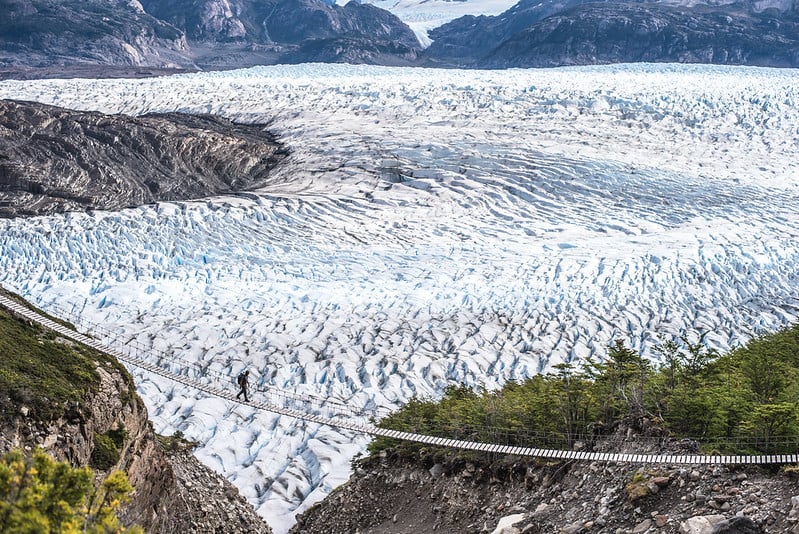 The Cuernos from Lake Pehoé

The Cuernos or ‘Horns’ are twin peaks of rock, layered into a black and white sandwich and then filed by the weather into a pair of chiselled horns that compete with the Towers themselves for command of the landscape. Given their impressive size, there are many viewpoints within the park that embrace the Cuernos, but there’s none better than the Pehoé lookout point on the trail that runs between Lake Nordenskjold and Lake Pehoé. This particular spot frames the mountains against the endless sky beyond whilst the glassy lake in the foreground creates a stunning mirror image. This is one viewpoint where inclement weather can actually improve the picture, as distant storm fronts swarm up against the mountain flanks. 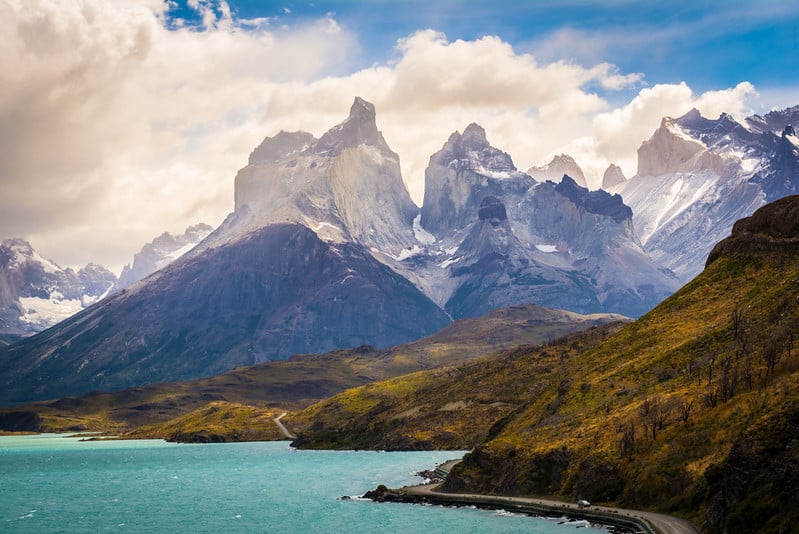 The French Valley viewpoint lies at the very end of the centre branch of the ‘W’ on the so-called W Trek. What would otherwise be a straightforward semicircular hike around the Paine Massif takes a deliberate detour in the middle just to lead hikers to the French Valley viewpoint. The lookout point faces the head of the valley with its arc of sheer cliffs curving away to both sides. Due to the natural amphitheatre of the rocks, this is one of the best places in Torres del Paine to enjoy a panoramic vista of the mountains. This theatrical view takes in all of the individual rock formations including the Blade, the Mask, the Sword, the Cathedral, the Shark’s Fin and the Fortress (check out our full W Trek guide here). 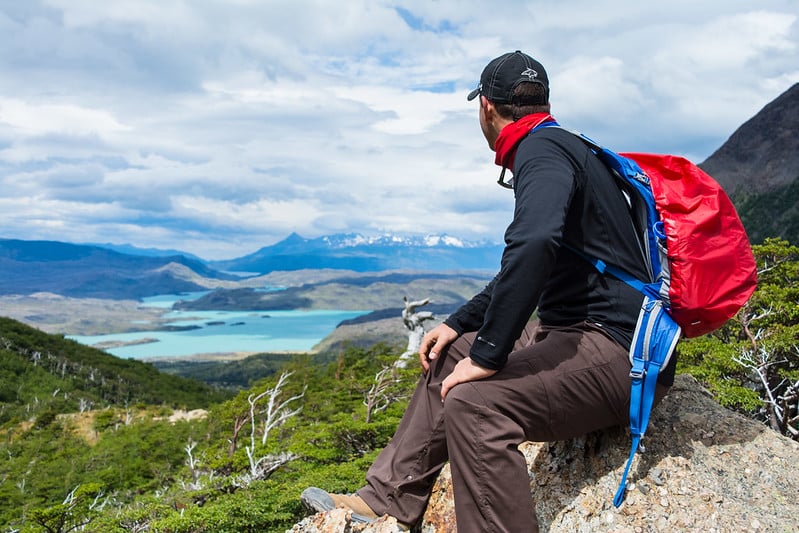 Grey Glacier from the Top Deck of a Boat

Grey Glacier is one of Torres del Paine’s most iconic glaciers, lying, as it does, in the path of both the Paine Circuit hike and the shorter W Trek route. Whilst you can appreciate the glittering wall of ice from the viewpoint on the shores of Grey Lake, you have to take the boat trip up to the plunging face to really appreciate each tiny rivulet of water gurgling through gaps in the ice and bask in the frozen glow that emanates from the monumental block of ice. Far from being a homogenous lump, the glacier is a puzzle of turquoise, blue, white and crystal clear ice that makes close-inspection a must. A boat trip on Grey Lake weaves amongst free floating icebergs and tours up and down both of the glacier’s snouts. And whilst there is a covered lower deck for shelter from the weather, the best views can be had by standing on the exposed upper deck where nothing but a few breaths of air stand between you and this natural monument. 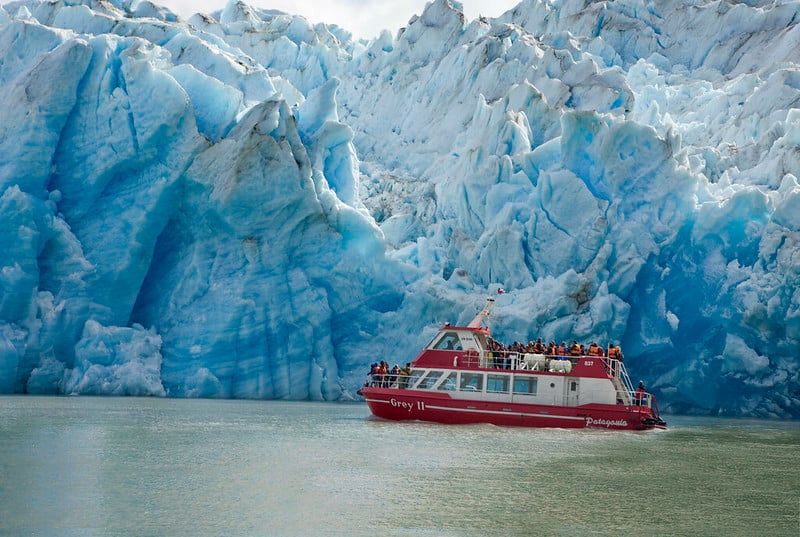 The Sky at Night from an EcoCamp Dome

On a clear night in Torres del Paine National Park, the sky feels so big you feel you could almost get lost in it. Here at the bottom of the world there’s next to no light pollution so the inky-black skies seem darker than ever whilst the pinprick stars jostle for space. It can get cold out once the sun drops, so one of the best places to enjoy this once-in-a-lifetime view is from one of the custom-built dome rooms at EcoCamp Patagonia. All of the domes have skylight windows designed to maximise natural light during the day and provide unparalleled views of the night sky once the sun goes down, all from your cosy bed. 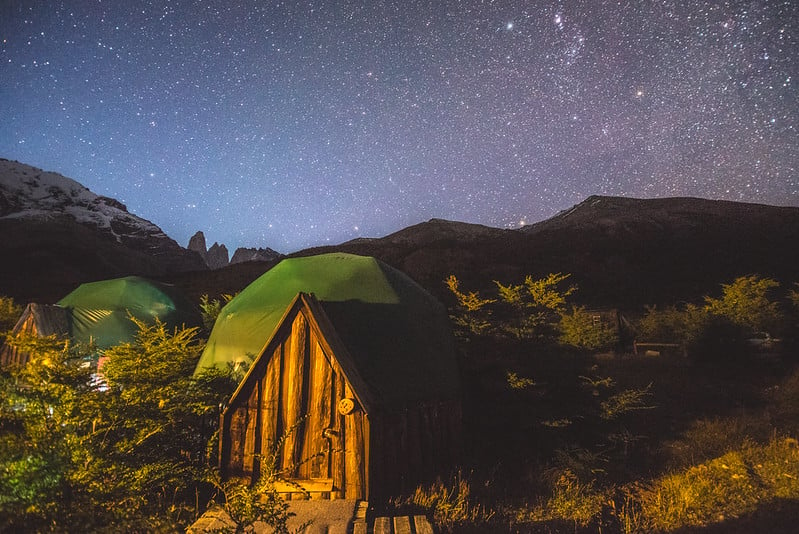 Isn’t it time you came to enjoy the best views in Torres del Paine National Park? Check out some of our favorite Patagonia tours, such as the Wildlife Safari or 7 Day W Trek.

You may not have heard about Kawésqar national park, but this is actually one of the largest national parks in the world, with an area of 7,023,542...
END_OF_DOCUMENT_TOKEN_TO_BE_REPLACED

When is the best time to travel to Torres del Paine? While it might seem easy to answer that question considering aspects of weather, planning a trip...
END_OF_DOCUMENT_TOKEN_TO_BE_REPLACED

“Winter is cold” , “Days in Winter are Short”, “There is snow in Winter”. While these statements are pretty accurate in Torres del Paine National...
END_OF_DOCUMENT_TOKEN_TO_BE_REPLACED