Weather in Torres del Paine: Why Is It So Wild?

If there’s one question at the top of your list before you set off on your Torres del Paine hike, it’s probably “What will the weather be like?”. We’d love to tell you the answer, but as you’re no doubt aware if you know anything at all about the park, nobody knows! A typical day in Torres del Paine might see wind, snow, rain and warm sunshine in any order and in any combination. So what makes the weather in Torres del Paine so impossible to predict? And what, if anything, can you do about it?

What is the Overall Climate Like in Torres del Paine?

We might not be able to tell you much about what will be happening with the weather next week (or even later today!) but there are general trends in the climate that hold true. Winter in Torres del Paine National Park is a cold affair with an average high of 5°C (41°F) and an average low of −3°C (27°F), whilst the average temperature during summer is 11°C (52°F). Rain and snow are possible at any time of year although March and April are the peak months for precipitation. You’re also more than likely to run across some of Torres del Paine’s legendary winds, which are at their most forceful during the summer months. To see more facts and figures about the climate in Torres del Paine National Park, click here!

Why is it so Windy?

Torres del Paine is infamous for its strong winds that have been known to reach up to 100mph and to knock hikers off their feet! The national park lies at a latitude of 51°C, placing it right in between the notorious zones known as the Roaring Forties and the Furious Fifties. These areas are known for their violent Westerly gales, caused when warm air from the equator meets cold air travelling north from Antarctica. These winds swirl across the southern hemisphere from west to east with very few land masses to slow them down, making them much more potent than similar winds in the northern hemisphere. Torres del Paine National Park is also not far from the very tip of the continent where the Pacific Ocean collides with the Atlantic, leaving narrow Patagonia at the mercy of both!

It's a pretty useful information to prepare for the W Trek! 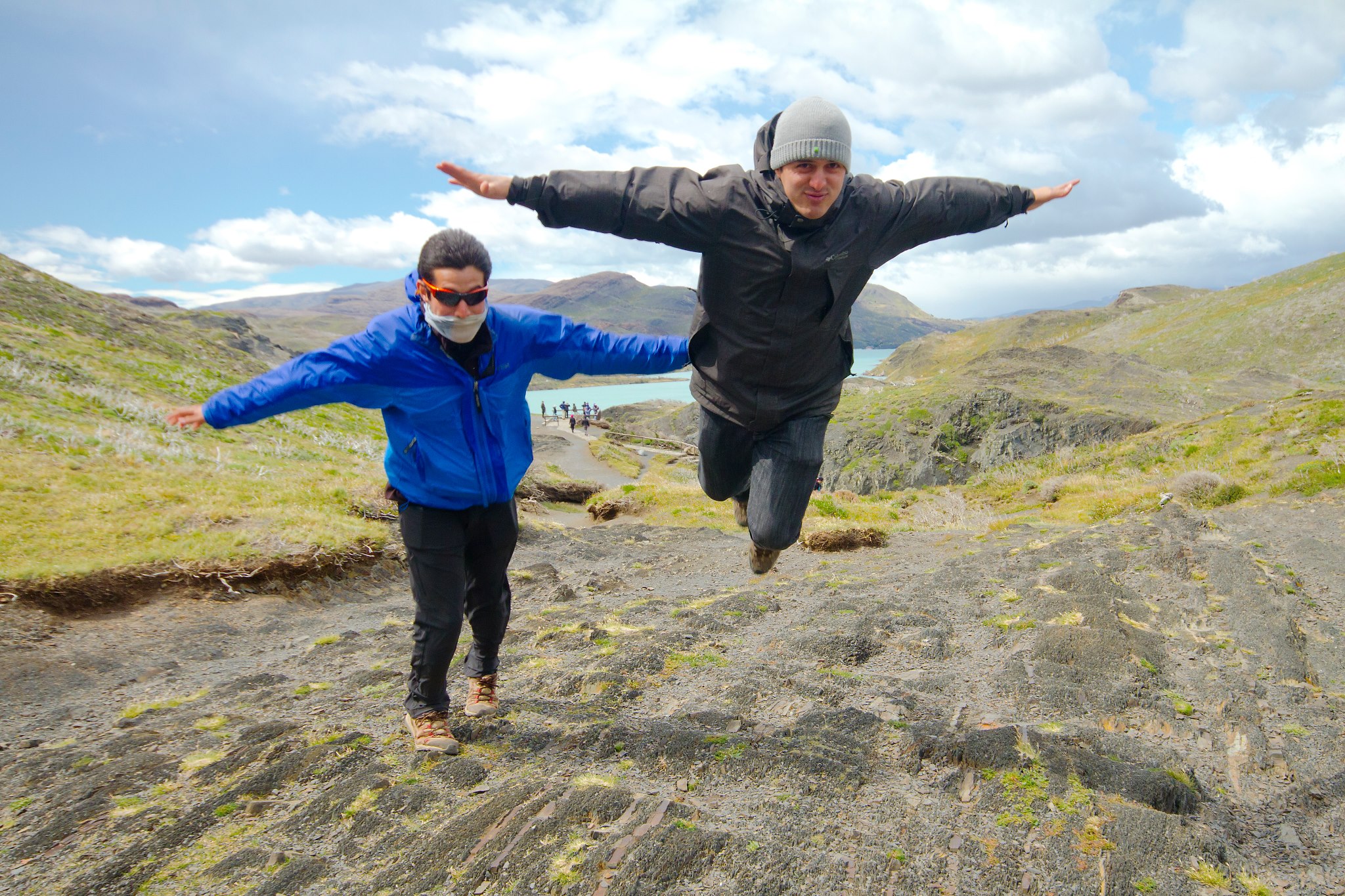 Why is the Weather So Changeable?

Perhaps the most frustrating thing about hiking in Torres del Paine National Park is that the weather is almost impossible to forecast as a result of its constant changeability. Here are two factors that play their part in taunting meteorologists and hikers alike:

1) It’s those winds again! One reason that the weather in Patagonia can be entirely different from one hour to the next is the powerful winds that whisk through the park. Weather fronts and banks of cloud are driven across the sky at a frantic pace, so by the time you’ve fished your waterproof jacket out of your bag and put it on, it’s often time to take it off again!

2) Perhaps even more significantly, the unique and complex orography (the pattern of mountains and hills) of Torres del Paine has a huge impact on the local weather patterns. The national park combines glaciers, rivers, mountains, valleys, fjords and open plains, all of which have their own individual impact on the weather, and it can be hard to predict just how the weather systems will interact once they encounter these specific features. Some of the park’s peaks cause the creation of rain shadows, where moisture-laden air gets backed up against one side of the mountain. As the air is forced upwards by the slope of the mountain it cools, forming clouds and ultimately rain. This means that the windward side of the mountain will be cloudy and rainy whilst the air that reaches the other side is moisture-free. Another upshot of this effect are Foehn winds. These occur when the dry air passing over the top of the mountain drops down the slope on the leeward side. As the air falls it becomes slightly warmer, creating winds that can be very powerful. In such a way, many wildly different microclimates can develop within a relatively small geographical area.

How to Read the Weather in Torres del Paine

The weather in Torres del Paine National Park is more or less unforecastable, but there are some small clues that you can use to read the weather. For example, spectacular lenticular clouds (try repeating that after a pisco sour!) are a fairly common sight in the park. These UFO-like clouds hover over the mountain tops and are often indicative of Foehn-like winds in the downwind direction.

Ultimately, however, the only real way to know exactly what the weather is like in Torres del Paine is to visit the park and take a look outside!

How to Beat the Weather in Torres del Paine

Packing for a Torres del Paine hike can be a confusing task and you may well find yourself in the position of packing items of clothing and kit that you ultimately never use. On balance, the best strategy is to opt for layers that will give you the maximum flexibility to adapt to any and all weather conditions. Check out our packing video guide below, perfect for all Patagonian weather conditions.

For more information on booking your hike in Torres del Paine National Park, check out Cascada’s full range of tours!

You may not have heard about Kawésqar national park, but this is actually one of the largest national parks in the world, with an area of 7,023,542...
END_OF_DOCUMENT_TOKEN_TO_BE_REPLACED

When is the best time to travel to Torres del Paine? While it might seem easy to answer that question considering aspects of weather, planning a trip...
END_OF_DOCUMENT_TOKEN_TO_BE_REPLACED

“Winter is cold” , “Days in Winter are Short”, “There is snow in Winter”. While these statements are pretty accurate in Torres del Paine National...
END_OF_DOCUMENT_TOKEN_TO_BE_REPLACED