Planet Earth is home to a grand total of 12 deserts and no two are quite the same. Each has its own personality, but would you know what’s special about the Atacama Desert in northern Chile? Separate fact from fiction with our no-nonsense, misconception-busting guide to the top 5 Atacama Desert myths! 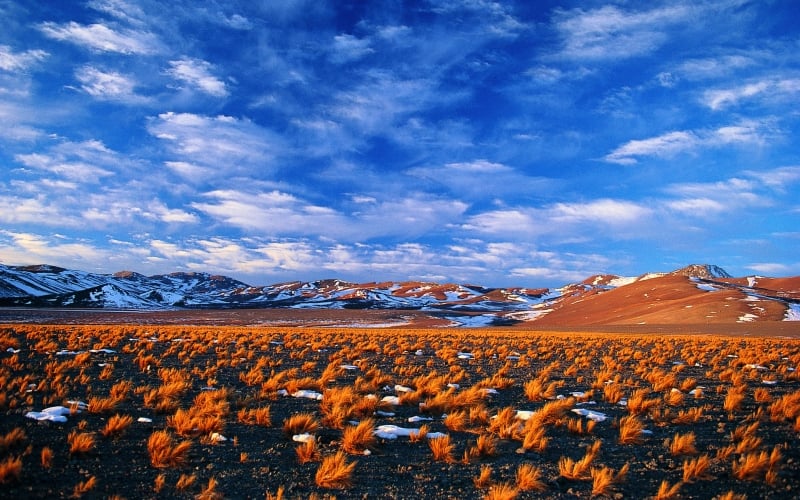 Our myth buster says: Nope! Say the word ‘desert’ and many people imagine a vast expanse of sand, baking and shimmering in the heat of the blistering sun. Throw in a palm tree or two and add some rolling dunes to the backdrop and you’ve got yourself a textbook desert. But if you turn up for a day in the Atacama Desert in shorts and a T-shirt, you might actually feel a little chilly. In fact, the Atacama Desert’s high altitude means that it’s relatively cool compared to many deserts. During the southern winter months of June to August, temperatures reach highs of around 22°C (72°F) during the day and can reach as low as -2°C (28°F) at night. Whilst during the summer months the average temperatures are around  27°C (81°F) during the day and 16°C (61°F) at night. That may put the Atacama way behind the Sahara Desert with summer highs of a positively roasting 50°C (122°F), but it’s certainly more enjoyable to hike in! If you visit at night to check out the Atacama’s unmatched star-gazing opportunities, make sure you wrap up warm. 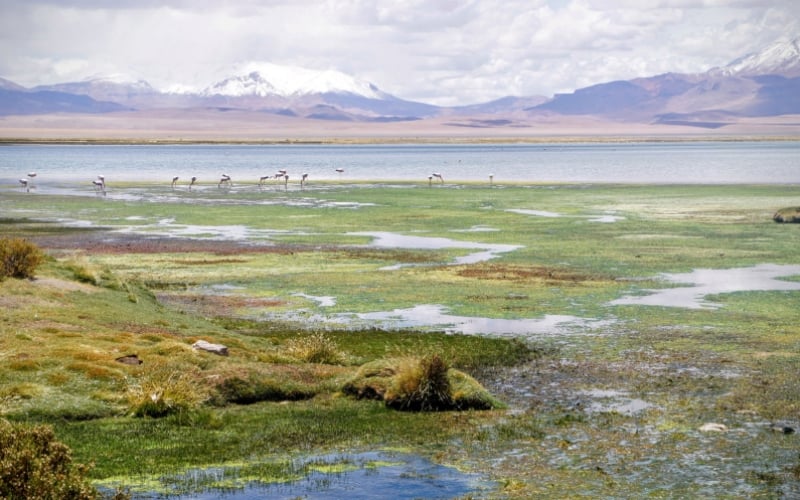 Myth #2: It never rains in the Atacama Desert

Our myth buster says: It does and it doesn’t. The Atacama Desert is famously the driest place on the planet. At some weather stations, rain has never been recorded and evidence suggests that it hasn’t rained there in thousands of years! The Atacama lies directly to the west of the towering Andes Mountains, so rain clouds sweeping across the continent from Argentina get trapped on the other side and never make it as far as the Atacama. At the same time, very few rain clouds come from the Pacific Ocean in the west because the very cold currents along the coast mean very little moisture is picked up by the cool winds. On the other hand, it wouldn’t be fair to say that it never rains anywhere in the Atacama Desert, even if the average is only 1mm a year. During the El Niño phenomenon - which occurs naturally every 2 to 12 years, with an average gap of 5 years - the ocean current is warmer than usual and rainfall in the desert can be substantially higher than average. 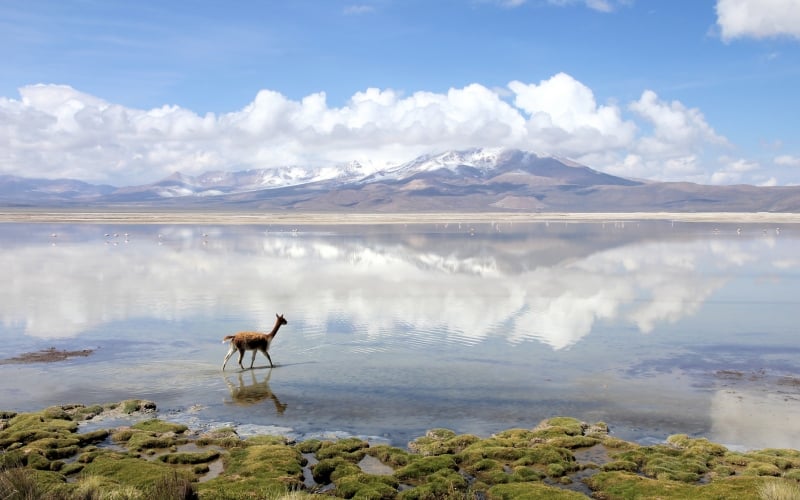 Myth #3: Nothing grows in the Atacama Desert

Our myth buster says: So we’ve established that the Atacama doesn’t get a whole lot of rain, but remarkably some areas do have quite a variety of plant life. The majority are grasses and shrubs with deep roots that can stretch out to find water deep underground, but even cactuses are relatively rare in the driest parts of the desert. Saltbush, tufted grass, buckwheat bush, and rice grass can all be found here. Trees are uncommon, although you might spot the occasional Mesquite tree on your visit to the Atacama Desert. And if you’re lucky enough to visit shortly after a rainy spell caused by El Niño, you’ll be treated to the sight of the desert abloom with a rainbow of colorful wildflowers! The desert also receives a fair amount of fog that rolls in from the Pacific Ocean. The local residents have learned to harvest this fog by stringing up netting and plastic sheets onto which the fog condenses and runs down to collect in buckets. It is then used for growing crops that would otherwise be impossible to cultivate in this arid area. 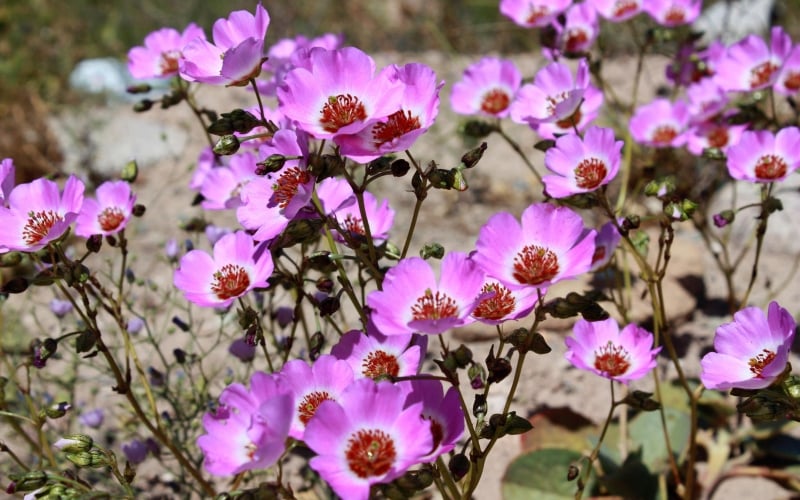 Myth #4: There is nothing to do in the Atacama but hike

Our myth buster says: It’s true that hiking in the Atacama Desert is not a bad way to explore this unique landscape. With moderate temperatures, a low-impact activity like hiking is perfect for seeing the unparalleled rock formations of Moon Valley whilst leaving few traces behind. But hiking is by no means the only thing do here. On our Epic Atacama Multi Sport adventure you will certainly do some hiking - but also give your feet a rest upon a horse and a mountain bike. You will witness the sunset at the salt flats in the company of flamingoes. If you’re a bit of a night owl, head out into the desert after sundown to catch a glimpse of one of the clearest views of the galaxy anywhere on Earth. Or if you’re an early riser take off before dawn for the nearby tatio geysers and watch this naturally explosive show as over 80 active geysers greet the crisp morning air with bursts of steam and boiling water. The volcanic activities that feed these impressive jets also supply the neighboring Puritama thermal springs with naturally heated water. Round up a hike in the Atacama Desert with a long soak in these mineral-rich waters to soothe your weary limbs. 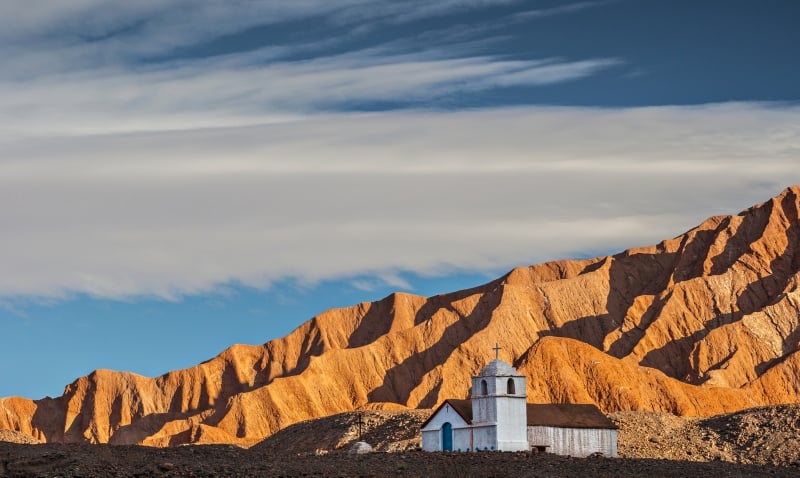 Myth #5: Nobody lives in the Atacama Desert

Our myth buster says: It may not be Times Square on New Year’s Eve exactly, but in fact, the Atacama Desert is far from deserted! It has been inhabited for thousands of years, although today most of its large cities are located along the Pacific coast. The first people known to have lived in this harsh environment are called Atacameños and were originally a group of nomadic hunters that tracked vicuña and guanaco - two animals related to the llama - across the barren landscape. Eventually, they settled down, raising animals and growing crops in oases around the present-day cities of San Pedro de Atacama and Calama amongst others. These cities and other desert towns were later occupied and expanded by Spanish colonists, often growing rapidly as a result of the booming mining industry in Chile’s north. There are said to be around 24,000 Atacameño people still living in the area today although their language is thought to have been extinct since the 1950s. An impressive collection of pottery and ceramics of the early inhabitants is on display at the R. P. Gustavo Le Paige Archaeological Museum in San Pedro de Atacama. 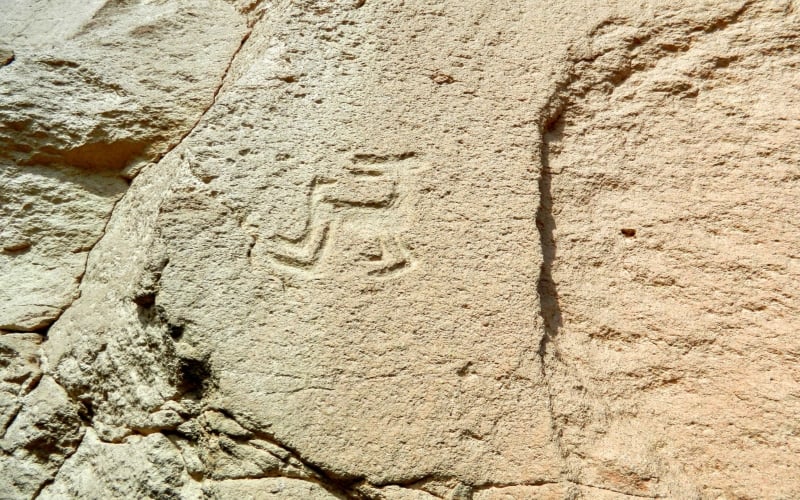 "As a birdwatcher, I find the Atacama Desert one of the best places in Chile to break out my binoculars!  My top trip? A 7 day trip into the heart of the desert miles from anyone else.  For more common misconceptions about Chile, check out our Top 5 Chile Myths - Busted and Top 5 Patagonia Myths - Busted!" Our Atacama Must series continues as former Media Coordinator, Helen, shares her experiences taking in the colorful sights of the Atacama Desert. One...
END_OF_DOCUMENT_TOKEN_TO_BE_REPLACED Think of the world’s driest desert, and flavorful gastronomy will rarely spring to mind. This would be a grievous mistake. To introduce you to...
END_OF_DOCUMENT_TOKEN_TO_BE_REPLACED