The Atacameños: People of the Desert

Arid, barren and inhospitable, the Atacama desert seems an unlikely place for early human habitation. The fact, however, is that human settlements in the Atacama can be traced back to over 6,000 years ago, and evidence of human activity goes back to more than 10,000 years ago. Called the Atacameños, or the Licanantay, the descendants of these early settlers can still be found in the region of Antofagasta, particularly near Calama and San Pedro de Atacama, and form one of the nine recognized indigenous peoples of Chile.

About 10,000 years ago, the region which we now call the Atacama was more humid and less hostile to human life than it is now. It attracted nomadic groups who came to hunt and collect food. Fast forward 4,000 years, the land dried up, gradually transforming into the landscape as we know it today. There is, fortunately, one important life source that remained - the Loa river, now the only river that traverses the entire desert from the Andes to the coast. By 900 B.C., there existed agricultural and llama-herding villages along the river, as well as around the area of present-day San Pedro de Atacama. 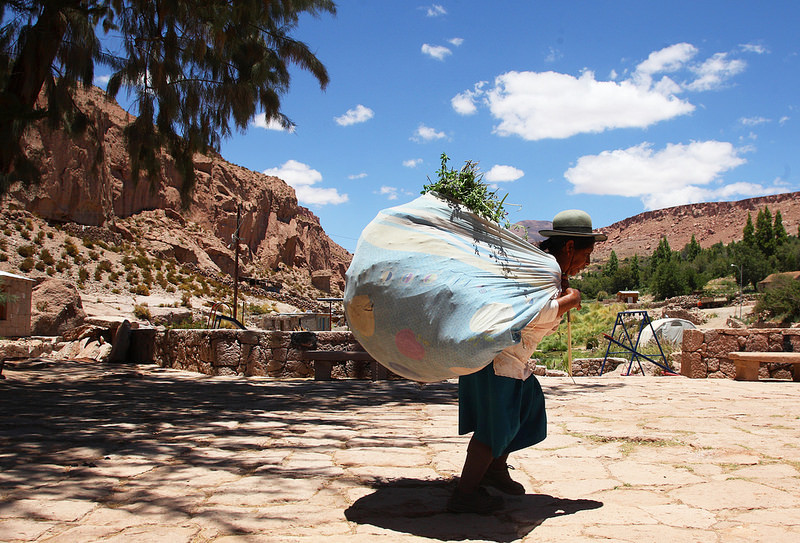 An indigenous woman in a traditional village of the Atacama desert

The San Pedro Culture developed between 400 and 700 A.D. Many pukaras, fortresses built at strategic points, were constructed during this time, the most representative one being Quitor. During the same period, the Tiwanaku Culture rose to prominence around the shores of Lake Titicaca, and we can see their influence on San Pedro Culture in the iconography of their textiles.

Following the mysterious collapse of the Tiwanaku Culture, the descendants of the San Pedro Culture, or the Atacameños, developed a system of transport of goods from the coast to the Andean highland, with strategic points ruled by powerful regional chieftains serving as nodes in the network. In the 15th century, the Atacemños were subjected to another period of foreign rule under the Inca empire, which incorporated the existing network into the larger imperial organism.

The arrival of the Spanish brought about the downfall of the Incas. The Atacameños violently resisted Spanish rule, culminating in the massacre of 300 natives at the pukara of Quitor. In 1557, the native chieftains agreed to pacification and signed an agreement recognizing that the atacmeños would henceforth be Spanish subjects, and had to render tribute to the Spanish Crown.

After independence, much of the Atacama desert became Bolivian and Peruvian territory, but as a result of the War of the Pacific (1879-1883), Chile claimed the Atacama region and proclaimed the indigenous Atacameños Chilean nationals. Those who self-identified as Peruvians or Bolivians were expelled. For many, the implementation of national borders broke ties between villages that now lay on different sides of the frontier.

Since the 19th century, many Atacameños were engaged in mining activities, such as the mining of silver nitrate and of copper. A large part of the indigenous population gravitated towards the urban centres of Chuquicamata and Calama. The collapse of the silver nitrate industry in the early 20th century, however, created an economic crisis whose effects can still be felt to this day.

In 1993, the Chilean government gave legal recognition to the Atacameños as one of the nine indigenous peoples of Chile. An unsolved problem is the distribution of land, which the Atacameños view as ancestral but currently belong to the State.

The rise of tourism in Atacama created a new economic opportunity for them, in addition to agriculture, llama herding, and mining. One of the benefits of tourism is that it stops the disintegration of traditional communities, as young people realize that they don’t need to migrate to the cities to find work because cultural tourism provides a viable means of economic support back in the villages where they came from.

The Atacameño Culture is heavily influenced by the Aymará and Quechua cultures. They share similar modes of social organization, world views, religious practices and customs.

The Atacameños are socially organized in units known as ayllus, which can be understood as communities sharing the same ancestral roots. Members of the same ayllu are strongly bonded to each other through familial and cultural ties. They decide communal matters together and assist each other in times of crisis.

The Atacameño worldview is heavily reminiscent of that of the Incas. They render tribute to the Pat’ta Hoy’ri, equivalent to the Incan Pachamama, or Mother Earth viewed as the source of prosperity or adversity of all those who dwell on her. They also see the landscape as living entities, embodying various kinds of spirits, such as those of their ancestors, of the hills and mountains and of the canals and waterways. This indigenous worldview is combined with Catholicism, to which the Atacameños have been converted as a result of Spanish rule. An interesting syncretism can be observed in the iconic churches found in almost every village in the region.

An important annual event is the enfloramiento, a ceremony in which the ear of one’s livestock is perforated and a pom-pom made of colorful wool is attached to the animal. The blood that drips to the ground represents an offering to Pachamama. The color of the pom-pom also serves as a way to identify and separate the livestock of different families. As less and less people practice herding, the enfloramiento has become a dying custom in recent years.

Just as the enfloramiento is a practice on the verge of disappearing, so too the limipa de canales, where whole ayllus get together to clean the waterways that irrigate the agricultural terraces. Songs, celebrations, and offerings to Pachamama are interspersed with the hard work. It used to be an important way of maintaining bonds within and between communities, but with the diminishing importance of agriculture, few people still participate in the cleaning of waterways. 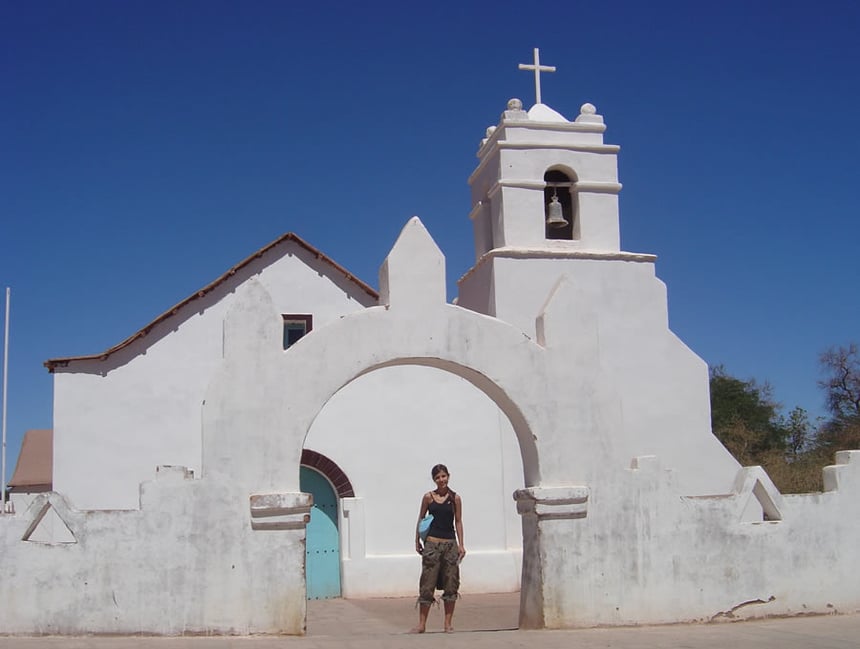 The San Pedro Church displays the typical syncretism of the Atacameños

Atacameño folklore reflects the environment in which it is told: the Andean fox, the condor, the quirquincho, as well as the Andean peaks, are regular characters. Popular motifs include animals dressing up as handsome young men to seduce unsuspecting maidens and the fox being outwitted by the animals that he tries to eat. Here we tell one version of the love story between Licancabur, Lascar and Juriques, volcanoes that can be seen around San Pedro de Atacama. Licancabur and Lascar are two young men who are trying to win the heart of Juriques, a beautiful woman. One day, they decided to fight. They started by throwing rocks at each other. Licancabur used a sharp, thin rock to cut off Lascar’s head, and won. Afterwards, Juriques arrived and sat by Licancabur’s side to cry. To this day, you can see that Lascar has a flat top due to the loss of his head (Unidad de Cultura, FUCOA, Atacameño). 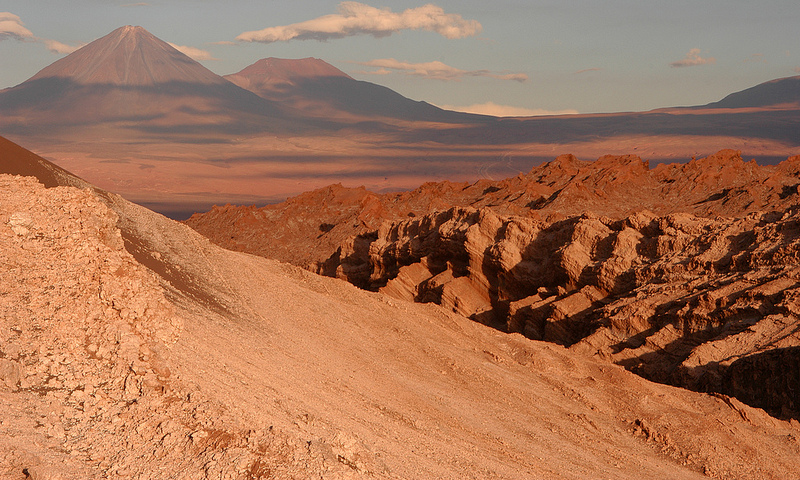 Ready for your big trip? You can visit indigenous communities and learn more about the Atacameños' disappearing way of life on Cascada's Atacama Desert - Cultural Adventure.
Get in touch with our team now

It's the month of September! That means it's time to celebrate Chile. It is Fiestas Patrias, the country's independence holidays and a time to...
END_OF_DOCUMENT_TOKEN_TO_BE_REPLACED

It’s a very special time for one small, remote place in the Pacific. That place is called Easter Island and it's home to a unique Polynesian culture...
END_OF_DOCUMENT_TOKEN_TO_BE_REPLACED