Our Patagonia Puma Tracking - Wildlife Discovery Adventure, under the expert guidance of animal tracker and wildlife photographer Diego Araya, gets you as close as it’s possible to get to the flora and fauna of Torres del Paine National Park. As well as his expertise as a wildlife guide, Diego is a professional wildlife photographer so he’ll be your go-to guy for any photo once you arrive in Patagonia. But in the meanwhile, here’s our list of the top 10 tips and tricks for tackling the unique challenges and one-off rewards of wildlife photography in Patagonia! 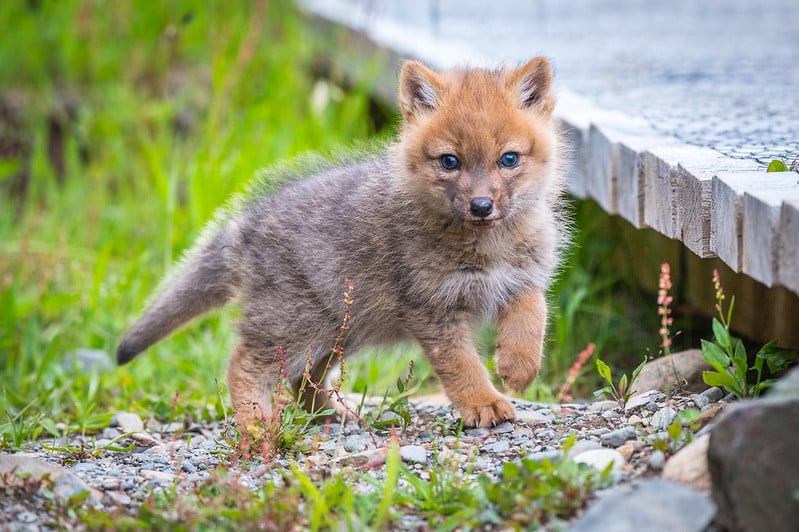 1. Respect the Animals and Their Environment

It’s natural to want to get as close as you possibly can to your subject in order to photograph it, but the story of a dolphin that died in China after tourists lifted it from the water to take photographs underlines the importance of putting the animal’s welfare first. Quite aside from the physical harm that can come to a wild animal under stress, you’re unlikely to get the natural, impactful images you want when tracking a distressed animal. It also makes sense to ensure you don’t degrade the environment in which you’re shooting. Some of Torres del Paine’s favorite subjects such as the huemul and the puma are endangered in the wild and the only reason they can be found within the national park is because of recent conservation campaigns aimed at boosting their numbers. When photographing rare animals in Patagonia, make sure you’re part of the solution, not part of the problem.

2. Get to Know Your Subject

As we touched on above, wildlife photography largely depends on waiting for a magic moment and then springing into action to capture it on film. It requires a huge amount of discipline to remain on high alert throughout the inevitable periods of inactivity and there’s always the risk that you’ll be caught napping at the opportune moment. You can dramatically increase your odds, however, by getting to know the animal or animals you plan to photograph before you travel to Torres del Paine. If you know that pumas are most active at dawn and dusk and rarely emerge during the day then you won't waste your time staking out that guanaco carcass at noon only to miss your puma sighting by returning to base for dinner. And if you know that huemuls tend to hang out in the eerie green lenga forests you won’t get distracted scouting for them on the plains.

This is the cardinal rule of all wildlife photography and unfortunately, it’s no less true in the vast expanses of the Patagonian Pampas. Great wildlife shots often rely on being in the right place at the right time and the only way to engineer those kinds of opportunities is to spend as much time as you can watching and waiting. When you’re waiting for long periods of time in one position a tripod can be a helpful aid, enabling you to hold your camera in the optimal position without tiring your muscles. Tired arms can lead to shaky hands, which in turn produce blurry photos, which is the last thing you want when you’ve been crouched in the grass for hours on end just waiting for a huemul to look your way.

Long lenses are the stock-in-trade of even the amateur wildlife photographer, allowing the user to capture fantastically detailed tight shots of flighty animals from a distance without disturbing them. So it can be tempting to spend your whole time in the field seeing just how close up you can get to that distant condor or that furtive grey fox. Whilst this is great for conveying character and personality in your photography, it can leave your photo collection feeling somewhat disembodied and lacking in context. After all, there’s nothing to demonstrate that your once-in-a-lifetime close-up of a puma was taken on a flinty cliff in the depths of Chilean Patagonia and not in the city zoo. Frame your subjects within the context of intriguing backdrops (there’s no shortage of those in Torres del Paine National Park) to convey the full story of your Patagonia photography tour. 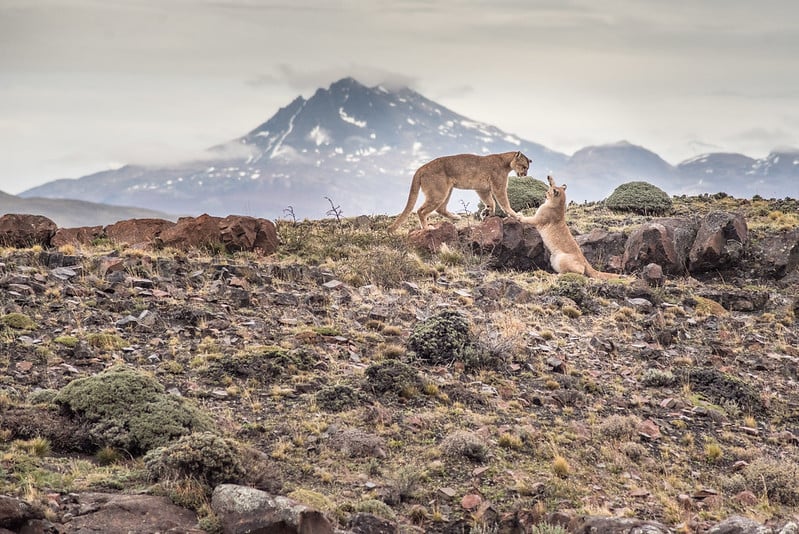 The flip-side of tip number two is that while it’s great to include wide shots of the breathtaking scenery of Torres del Paine in your wildlife photographs to lend a sense of place, you’ll ultimately get more sense of an animal’s personality with a tight shot. Ideally, your final collection will include a mix of wide, medium and close shots to tell the full story of the wildlife in the park. Extreme close-ups or macro photographs can show an animal or even a plant in a previously unseen light and provide a truly original twist to your Torres del Paine portfolio. This tip is a good one to try out on one of the many guanacos that roam the park. These llama-like animals are fairly commonplace and have little fear of humans within the national park. Combined with their characterful faces, this makes them the perfect candidate for a fresh portrait.

We know, we know, you’ve come all the way to Patagonia and you’re not going home without a picture of 1) a puma 2) a condor 3) a huemul. There’s no harm in that, it’s not a bad goal to have in mind. But it’s worth remembering that there are 26 species of mammal and over 100 species of bird in Torres del Paine National Park (and that’s not even to mention the amphibians, insects, and flowers you’ll come across). There’s no such thing as a boring subject - only photographers lacking in imagination! - and it’s not unusual for an interesting composition or an original perspective on a less thrilling subject to vie with an uninspiring photograph of one of the big hitters. Keep your eyes on the ground for small frogs or insects that others have overlooked and find a compelling way to frame them in the grass. Even animals footprints in the mud can add an interesting dimension to your story. 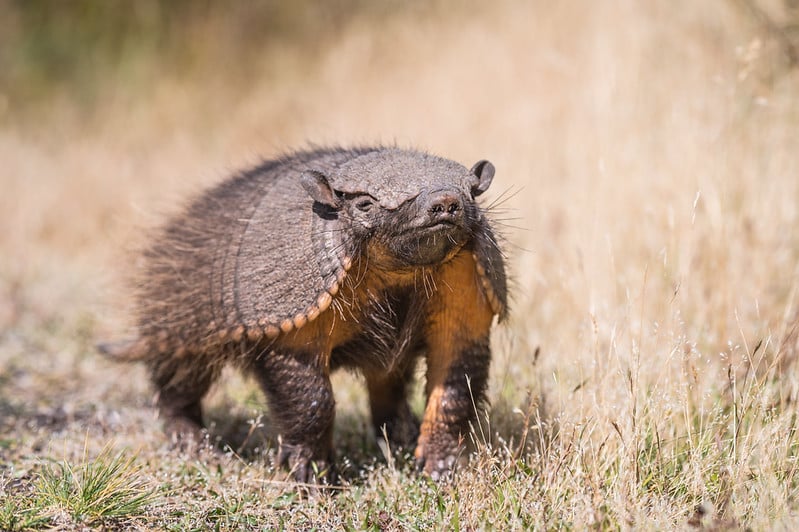 A handy tip for all wildlife photographers is that photos often turn out to be much more eye-catching when you get down to the same level as the animal itself in order to take the picture. Try to see your subject eye to eye. This not only shows the world from the animal's perspective but also increases your chances of portraying meaningful eye-contact with your subject. However, in soggy Patagonia, this can mean lots of time rolling around in wet grass if you’re struggling to reach the same height as a fox or a puma. Be sure to bring a good pair of waterproof trousers and a waterproof jacket to ensure you stay dry and comfortable for long enough to set up the shot.

When you first start out taking photos of the wildlife in Torres del Paine National Park, it’s easy to get so carried away with the experience that it’s not until you head back to base and scroll through the day’s images that you realise how static they are. Your shots of a grazing guanaco or an ostrich-like ñandu may be technically close to perfect, but if your subject is just standing idly by, the resulting photos can be a little bland. To remedy this, plan to place yourself in situations where you’re more likely to catch animals interacting with each other or with the environment around them. We can’t all be lucky enough to happen across a hunting puma but there are plenty of other scenarios that you can turn to your advantage. Large groups of guanacos can be a powder keg of pent-up hormones just waiting to explode in a fight. Listen out for the distinctive snickering cry of angry young male guanacos and get your camera ready for a dramatic action shot. 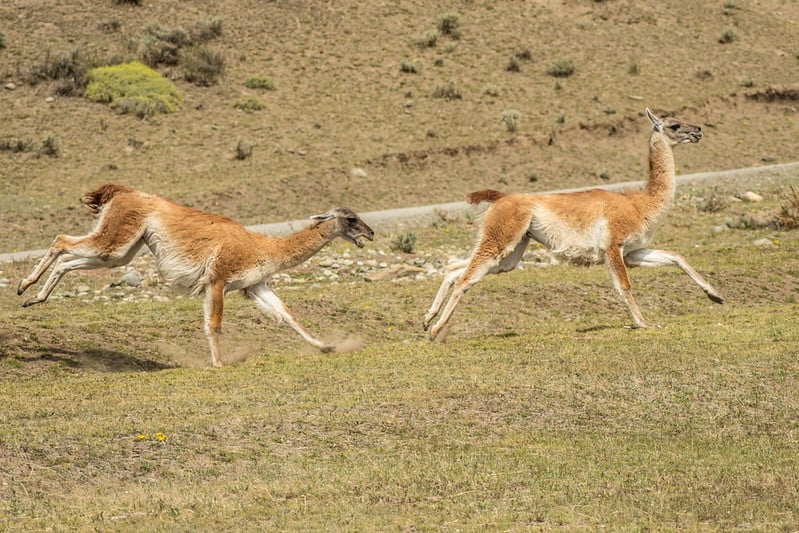 After all, this is Patagonia so you probably won't have to wait for very long! Much has been made of the so-called “golden hour”, the short period of amber lighting conditions that occur naturally around dawn and sunset. Some photographers even completely refuse to shoot in the middle of the day when direct sunlight can bleach the depth out of even the most carefully considered photographs. But cloud cover can also be a great diffuse of harsh daylight and Patagonia’s highly erratic weather means that there’s often a stormy weather front somewhere to be found within Torres del Paine National Park. Aside from adding depth and drama to the backdrop, Patagonia’s racing clouds can also create a constantly changing lighting environment so you can experiment with the best conditions to capture your wildlife shot.

If you’re only planning to be in Patagonia for a short space of time or you’re relatively new to the world of photography, taking an organised wildlife photography tour might be the best tip we can offer. Working with a guide trained in both Patagonian wildlife tracking and wildlife photography you’ll have access to professional advice on how to make the most of the conditions in order to take the best photographs. You’ll also enjoy privileged access to the secret animal hideouts known only to those with long years of experience tracking wildlife in the park. Any worthwhile wildlife photography tour in Patagonia will also have the support of a team of wildlife trackers, separate from the main photography group, whose only job is to locate interesting wildlife for you to photograph. That means you’ll spend less of your photography vacation chasing shadows and more time actually honing your wildlife photography skills. With Cascada's guide Diego Araya at the helm, you'll also learn how to put these tips and techniques into practice responsibly, safe in the knowledge that your activities aren't harming the animals or the habitat that you've come to observe. 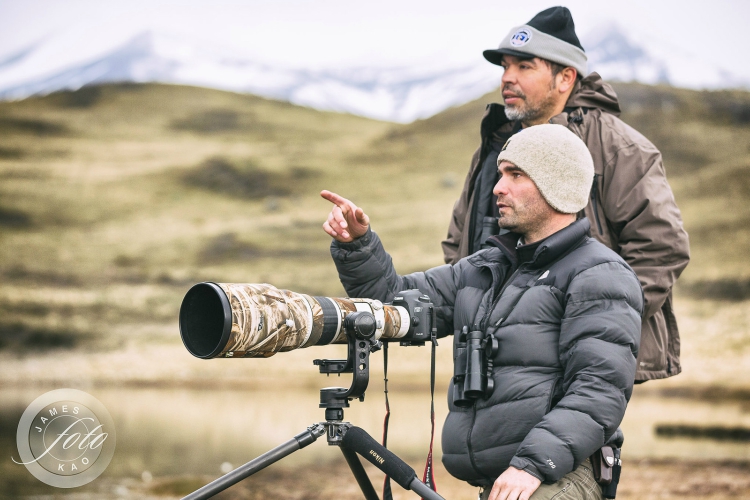 Are you thinking about your own Patagonia wildlife photography vacation? Take a look at EcoCamp's Patagonia Puma Tracking Wildlife Discovery Adventure

Written by Julien Mordret Chile stretches along the western edge of South America, with roughly 6,000 kilometers of the Pacific Ocean coastline....
END_OF_DOCUMENT_TOKEN_TO_BE_REPLACED

“Winter is cold” , “Days in Winter are Short”, “There is snow in Winter”. While these statements are pretty accurate in Torres del Paine National...
END_OF_DOCUMENT_TOKEN_TO_BE_REPLACED

Chile is a thin country, full of big surprises. Chile has a total distance from North to South is about 4.300 kilometers (2.671 miles). It extends...
END_OF_DOCUMENT_TOKEN_TO_BE_REPLACED