As a keen bird watcher, you know that you’ll have the opportunity to see such greats as the a Andean Condor and the Chilean Flamingo on your Patagonia tour, but that’s not what you’ve come for. You’re not some common or garden bird watcher, you’re a twitcher, which means you’re planning your once in a lifetime trip to Patagonia to see the birds that nobody else gets to see. With that in mind, we’ve put together a collection of the most elusive and rare birds in Patagonia, to help you tell the megaticks from the everyday avifauna.

Only recognised as a species in the early 1980s, the Chubut Steamer Duck is only found on the sparsely populated coast around the San Jorge Gulf in Agentinean Patagonia’s Chubut region.

The Wandering Albatross has the longest wingspan of any bird, which can be as long as 11 feet 6 inches (3.5 metres). The bird spends most of its life in flight, landing only to breed and feed and is most often observed by sea.

Also known as the Cape Hen, White-chinned Petrels fish the waters between Patagonia and Australia, picking up krill and fish from just below the surface of the waves and occasionally undertaking shallow dives.

The Westland Petrel is another seabird that breeds in New Zealand but ranges all the way to the southern Chilean coast. The population is currently stable due to conservation efforts but faces predation from introduced predators such as feral cats.

This seabird nests in burrows on the forested slopes of a small selection of islands near to Chile’s central Lake District, to the north of Patagonia, but they are also sighted further south.

Found in the Santa Cruz and Chubut regions of Argentina and the Magallanes region of Chile, the Austral Rail was once so rarely sighted it was considered extinct. It remains threatened by habitat loss.

Found along Argentina’s Atlantic coast in the Chubut region and further north, Olrog’s Gull is a specialist predator, feeding mainly on crab. Its population is slowly but steadily declining.

This red-breasted bird is found on natural grasslands in Argentinean Patagonia where it feeds on seeds, insects and plant shoots. The Pampas Meadowlark has been known to coexist with cattle but is more often found on uncultivated land.

The Black-browed Albatross breeds in both Chilean and Argentinean Patagonia as well as in the Falkland Islands. It largely ranges throughout the Southern Ocean, however one individual was found summering as far away as Scotland.

The Atlantic Petrel breeds on the remote volcanic islands of Tristan de Cunha in the Atlantic Ocean. However, introduced rats now threaten the population although it is still possible to sight roving Atlantic Petrels off the coast of Argentinean Patagonia.

This fierce bird of prey is most active during the early evening hours when it will hunt everything from armadillos to monkeys. The population has a very low density, making it very unusual to spot a Crowned Solitary Eagle in the wild.

The Yellow Cardinal inhabits open woodland and shrubby steppe land up to 100 metres above sea level. It is still found in small numbers in Brazil and Uruguay and is very rarely sighted in Argentina as far south as the Río Negro province.

Found only in the south of Argentina, there may be fewer than 1,000 Hooded Grebes left in the wild. The birds breed on a few basaltic lakes in the Santa Cruz region and there is a tiny population within the Perito Moreno National Park in Patagonia.

Once abundant, the Eskimo Curlew was hunted to its current critically endangered status during the 19th Century. Nobody has recorded a positive sighting of an Eskimo Curlew since 1963, but a trickle of unconfirmed sightings persists. 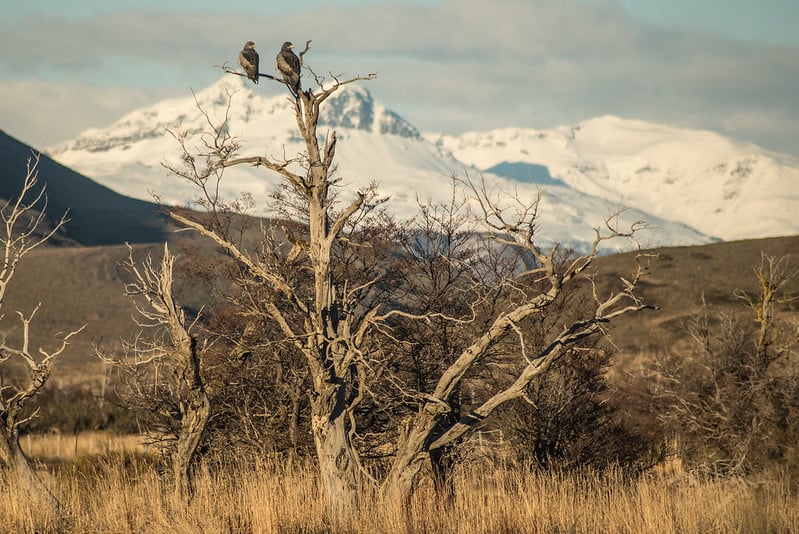 Like what you're reading? There's more where that came from! Check out our blog.

There are 18 species of penguins in the world. And the cutest one might be the Magellanic penguin, which can be found in the southernmost region of...
END_OF_DOCUMENT_TOKEN_TO_BE_REPLACED

You may not have heard about Kawésqar national park, but this is actually one of the largest national parks in the world, with an area of 7,023,542...
END_OF_DOCUMENT_TOKEN_TO_BE_REPLACED

When is the best time to travel to Torres del Paine? While it might seem easy to answer that question considering aspects of weather, planning a trip...
END_OF_DOCUMENT_TOKEN_TO_BE_REPLACED