All You've Ever Wanted to Know About the Humboldt Penguin

Meet the charming Humboldt penguin (Spheniscus humboldti), Chile and Peru’s favourite monochrome bird! Found pottering and plunging along 1,000 miles of the South American Pacific Coast, and on a handful of rocky islets, the pint-size Humboldt penguin measures up to 64 cm high and weighs in at 4 kg. They are easy to identify, with a distinctive black band across their white fronts, and their chests have a spotted pattern unique to every penguin. They are also known as the Peruvian penguin, or the Patranca.

Humboldt penguins live up to 20 years in the wild and are very strong swimmers, with their wings acting as powerful flippers. They can dive up to 150 metres underwater and swim up to 20 miles per hour, flying gracefully through the cold water, and using their feet and tail for steering. 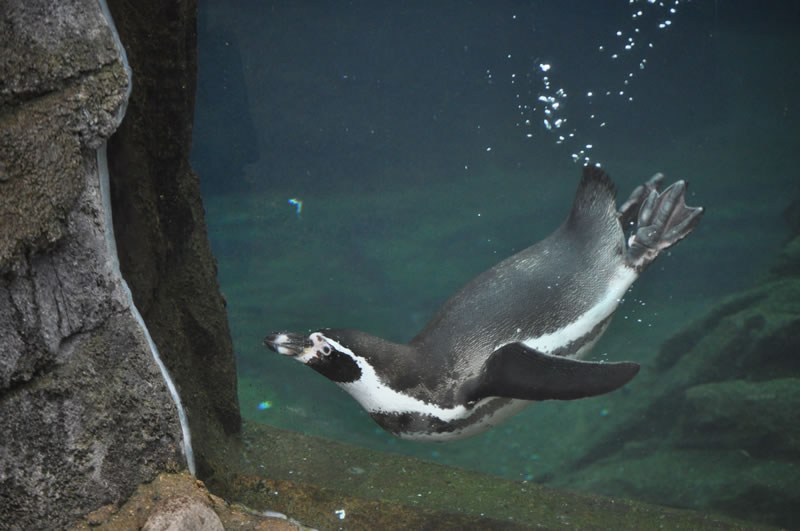 They might waddle on land, but they fly underwater!

Two thick layers of stiff, overlapping feathers help keep the Humboldt penguin waterproof, and a layer of blubber provides invaluable insulation. Their feathers are also covered in an oil which is secreted from the base of the tail. Before each fishing trip, every well-prepared Humboldt will preen his or her feathers to coat them in oil. Humboldt penguins undergo an annual moult to replace the old feathers, and this only lasts 10 days in total. They also have patches of bare, pink skin around their beaks, which helps cool them down when temperatures soar. The heated blood rushes to their exposed skin, giving the bashful penguins an endearing blush on a warm, sunny day!

Even penguins get embarrassed sometimes...

These clever penguins also have tiny spines lining their tongues to help get a grip on slippery, wriggling fish. Humboldts possess special glands for removing the salt from the water they drink too. The glands concentrate the salt, which then drips out down their bills.

Humboldt penguins often mate for life, and each and every one has a unique vocal sound and scent to enable their nearest and dearest to pick them out from the penguin crowd. Baby Humboldt chicks are a far cry (or squawk) from their streamlined elders, and are covered in a soft, pale grey down. They are completely reliant upon their parents for the first ten weeks of their lives. The father and the mother take turns incubating their eggs (normally up to three are laid by Mother Penguin at once) and looking after the little ones, whilst the other takes to the sea in search of food. Humboldts are caring, sociable creatures, and when hunting they form formidable penguin packs together. 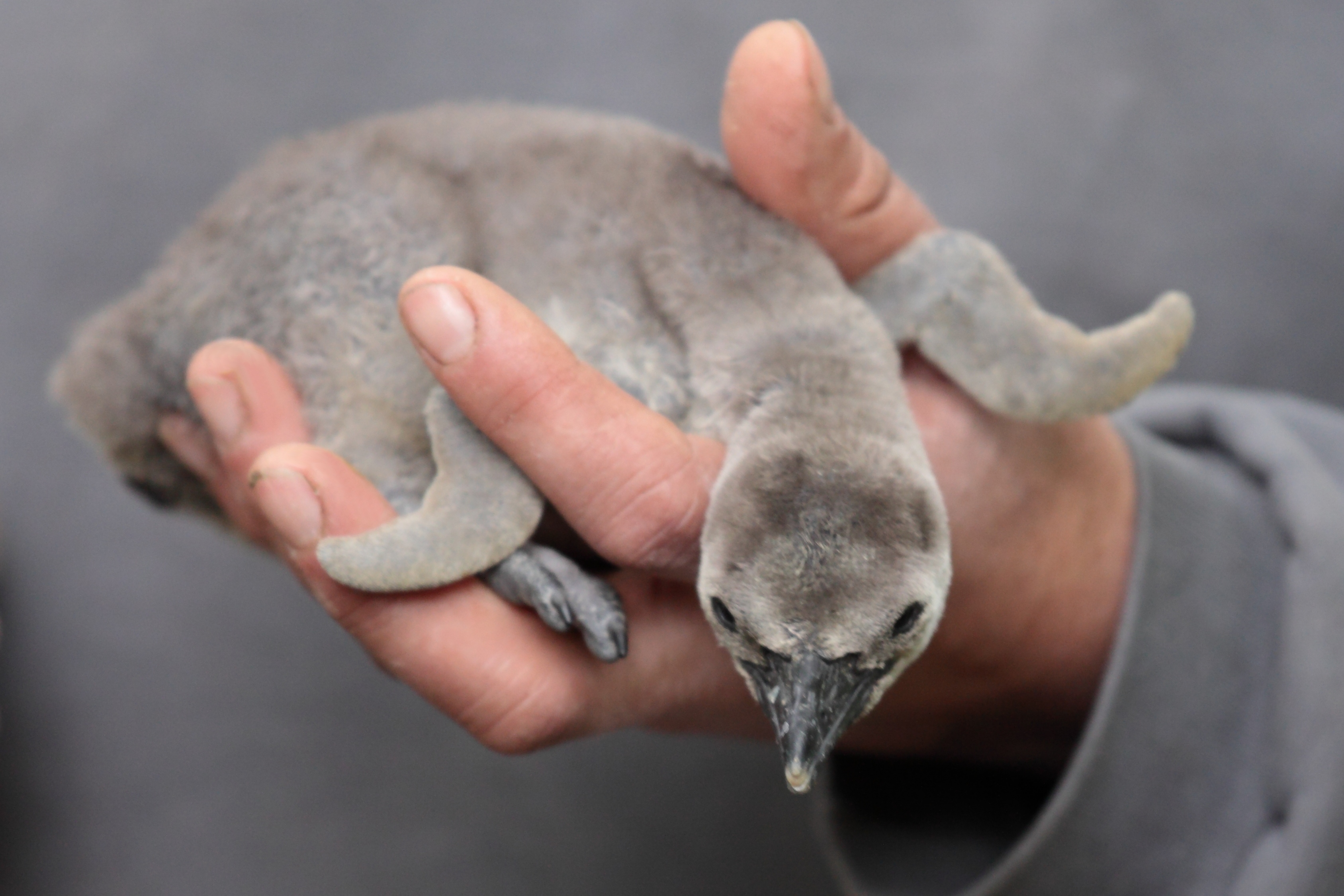 Regrettably, the Humboldt penguin is an endangered species, with numbers plummeting in recent decades. There are only an estimated 2,500 - 12,000 left in the wild. Since 1988, the International Union for the Conservation of Nature has listed the penguins on its vulnerable list, and Humboldt hunting has been illegal since 1995. Their natural predators include leopard and fur seals, sea lions, sharks, killer whales, and Andean foxes, but there are far more risks than the circle of life facing the humble Humboldt in the twenty-first century.

One problem is a reduction in its prey, caused by overfishing and also the impact of ocean currents such as El Niño. The penguins thrive along the Pacific Coast thanks to the cold, mineral-rich waters of the Humboldt Current (named after German explorer Alexander von Humboldt), which offers up tasty treats such as anchovies and sardines. The warm waters brought by El Niño, however, push the Humboldt Current off course, meaning many penguins go hungry. They are forced to undertake longer fishing trips, often exposing their young ones to predators. Ocean swell caused by the El Niño phenomenon can flood penguin burrows along the shores. These shelters are also at risk from heavy pelicans nesting above, causing them to cave in. 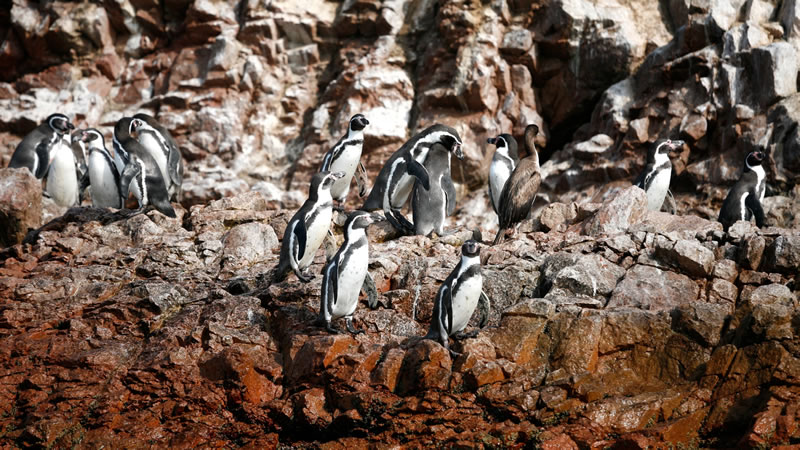 Humboldt penguins generally form nests by burrowing several metres into guano, or sea bird, bat, and seal excrement. Guano is of vital importance to Humboldt communities, but it is also of great commercial interest, serving as a valued and efficient agricultural fertiliser. It is scraped off rocks on a large scale, leaving the penguins with nowhere to make a nest, and guano harvesters often crush and trample the existing ones. This means the penguins are increasingly forced to inhabit caves and rocky nooks, which are all vulnerable to flooding. 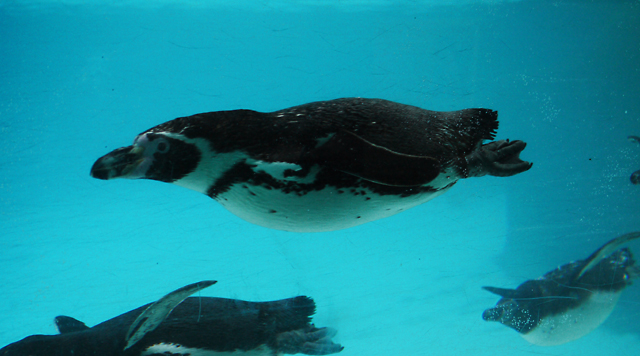 Oil spillages, infestations of rats eating hatchlings and eggs, and an increase in penguins becoming entangled in fishing nets have not helped boost numbers either.

But no one is giving up on the hardy Humboldt penguin just yet! Click here for a report about the successful breeding of two chicks by conservation workers in Peru - it looks like numbers might just start to waddle in the opposite direction with a little penguin perseverance.

Humboldt penguins need to look out for one another

Who rules the Chilean animal kingdom for you? Do you personally prefer a penguin, a puma or another animal? Here at Cascada, we help eager travelers discover native Chilean fauna. Check out our wildlife adventures here. There are 18 species of penguins in the world. And the cutest one might be the Magellanic penguin, which can be found in the southernmost region of...
END_OF_DOCUMENT_TOKEN_TO_BE_REPLACED

Chile just had its best Winter days in years.  The country has been experiencing a severe drought for quite some time. According to recent...
END_OF_DOCUMENT_TOKEN_TO_BE_REPLACED

“Patagonia’s ghosts” are not ghosts any more. While pumas were hard to spot just a few decades ago, nowadays travelers from around the world come to...
END_OF_DOCUMENT_TOKEN_TO_BE_REPLACED