6 Photos To Transport You To Atacama

Mention the word Atacama, and immediately you conjure up images of endless, arid sands, long days of relentless, beating sun, and clear night skies providing an unrivaled window to the misty nebulae, stunning supernovae, and celestial constellations of our universe. And you would be right! These pictures will transport you from your desk to the arid high desert of the Atacama, where you'll encounter other-worldly landscapes, endless night skies, wildlife, and ancient culture! 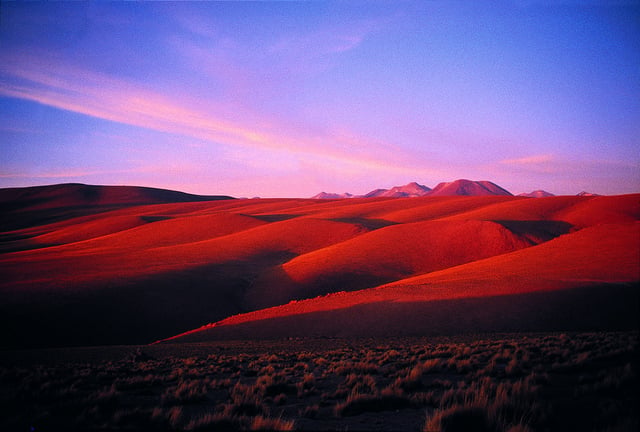 Atacama is much-famed for being the driest place on Earth -- NASA has even used the area to create hypotheses about the conditions on Mars. It stretches over the northern part of Chile, as well as encroaching into some of Peru, Bolivia and Argentina. Receiving less than an average of 1 mm of rain a year, the Atacama lies in the rain shadow of the Andes mountains. A cold ocean current running along the coast also means that winds are too cold to collect moisture, making them unusually dry when they blow in off the ocean. One advantage of the dryness, however, is that Atacama is the only place in the world where saltpetre can be found, a nitrate which is used in fertilisers and explosives. The relentless sun exposure has also made Atacama a hope for the bright future of Chilean solar power. And one of Mother Nature’s most beautiful shows graces Atacama on special years when winter rainfall has been at just the right level: the desierto florido is an eruption of colour and wildflower wonderfulness in the midst of a barren landscape!

Atacama is blessed with some of the clearest skies on the planet.

Go all starry-eyed over the gleaming constellations, shooting stars, and twinkling galaxies of the clear night skies over the Atacama desert. A combination of very low rainfall, low light pollution, and high altitudes make for a stellar star-gazing spot. Many observatories are closed to the public and engaged in astronomical research, but some do conduct guided tours, including Cerro Paranal. Atacama is also home to the famous ALMA radio telescope, located in the largest land-based observatory ever built. Comprised of a series of dishes planted around the desert at an altitude of 5,000 metres, ALMA (Atacama Large Millimeter/Submillimeter Array) is more powerful than the Hubble telescope, and it can provide images of stars and planets still in the process of their formation, including a solar system only one million years old! 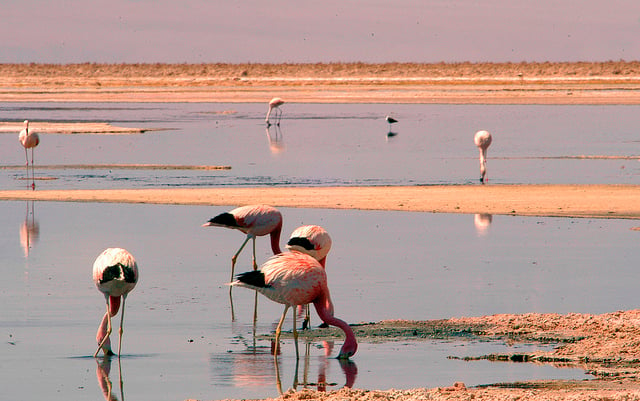 No fewer than three species of flamingo can be spotted in the Reserva Nacional Los Flamencos, with many bright pink feathered friends strutting the salty shores of the Salar de Atacama (Atacama salt flat). A 62-mile-long mineralised lake, this is the largest salt flat in Chile, with several lagoons, including the Laguna Sejar. These gleaming sapphire and emerald waters contain more salt and lithium than the Dead Sea itself, so you can bob and float comfortably under azure skies. 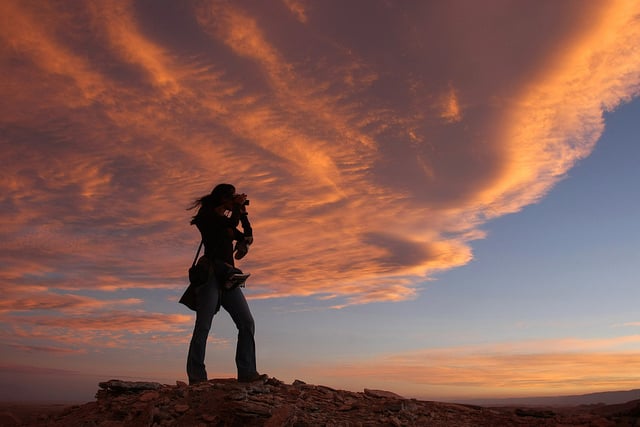 The Atacama area has been inhabited by indigenous peoples for thousands upon thousands of years, and some astonishing vestiges of a vanishing culture remain. In the Valle del Encanto, for example, any amateur archaeologist can marvel at petroglyphs etched by El Molle people, who dwelt in the area up until around the 600 AD. Yerbas Buenas is also the site of petroglyphs created by the ancient Atacameño people, dating back up to 10,000 years.

Found at 2550 metres above sea level, and roughly 9 miles west of San Pedro, the eerie majesty of the Valle de la Luna (Moon Valley) is undeniable. A spectacular, lunar landscape hewn by the elemental forces of wind and water, it is utterly unmissable for its breathtaking sunrises and sunsets, when the dusty sand dunes become awash with a mesmerizing kaleidoscope of scarlet, violet, and gold. Salt and stone hills surround the depression in which the valley is situated, with a colossal sand dune running right through the centre. 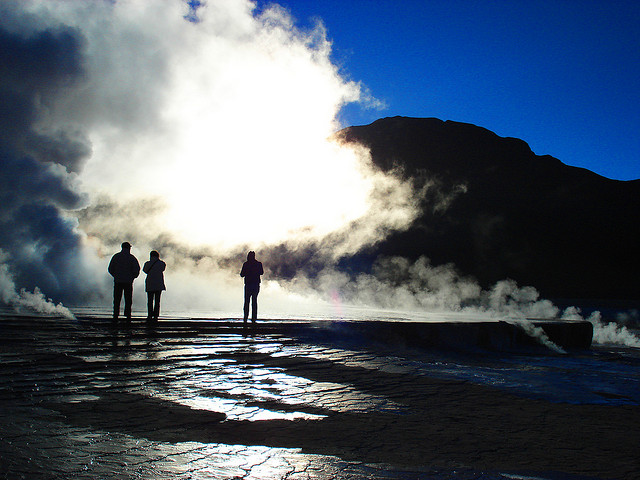 Early morning at the Tatio geysers.

The atmospheric Tatio geysers are active between the chilly hours of 6-8 AM, meaning that tours leave as early as 4 o’clock in the morning. But dragging yourself out of your comfy bed is more than worth the momentary torture to catch the ethereal, trailing wisps and sudden, dramatic spurts of steam in the soft light of the dawn, with the odd pottering vicuña minding their own business in the background. With over 80 geysers, and surrounded by imposing volcanoes, this is the world’s third largest geyser field, and visiting is a true, once-in-a-lifetime experience.

So, now that you have seen the photographic beauty of the region, why not go there in real life and experience our Epic Atacama  Adventure?

You’re probably familiar with the fact Patagonia is one of the most beautiful regions on Earth. It is one of the last true wild places on the planet,...
END_OF_DOCUMENT_TOKEN_TO_BE_REPLACED

Need some travel inspiration?  Patagonia is a remote destination and getting there is a long trip. But you can travel instantaneously just by...
END_OF_DOCUMENT_TOKEN_TO_BE_REPLACED

Last Update : June, 18th 2022 Planning a trip to Chile? 2020 was a bad year for travelers, with most borders being closed as “stay home” became the...
END_OF_DOCUMENT_TOKEN_TO_BE_REPLACED